What Do People Say About Us?

Great communication! I will purchase from this company again. Thank you for your help and assistance. Best Wishes.
--Take A Bow Productions

Can't say enough positive about this company. Knowledgeable, very helpful and so pleasant. The turn around time on the order was amazing!
--Lorraine Hopkins, ITR Theatre Company, Ottawa, Canada 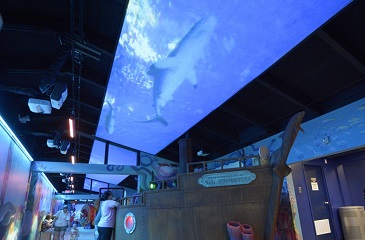 Scrim in use for live action projection of flag waving in wind. Simultaneous front projection and rear projections with a scrim. Projection on a dark scrim.


The first choice facing someone projecting on a scrim is between either front or rear projection. The second choice is type of scrim. The two decisions are linked. Ordinary scrim is called Sharkstooth Scrim. We are referring to it as 'ordinary' because it's the scrim most people are familiar with, but shark's tooth is fun in and of itself for some effects. However for projection sharkstooth has a strong weakness. Sharkstooth is a stretchy knit fabric. It must be stretched out to hang it, but when stretched the 'holes' in the knit become about the size of the holes in a screen window. You can imagine that projections from the front of the back of sharkstooth lose much of the projection strength because of those voids. Chameleon™ scrim is a spunbonded fabric, not stretchable with a denser surface. While Chameleon™ scrim has voids--as any scrim does--those voids are smaller.


The most common concerns with front projection are the choice of projector, distance and the chance of casting shadows on the projection by actors/props in front of the scrim. The projector must be scaled to the venue. Don�t try to use a conference room projector for a full stage area. You can test a projector in the setting with a sample projection on a wall or light colored even surface. Another hint about the feasibility of using a projector is what distance is it currently being used to project an image from. Similar distance indicates similar strength of projection. Light strength dissipates at the cube of the distance if there is no lens. Lenses are used to focus the light for a further throw of the projection, but can�t totally eliminate the need for projector strength. So projector choice and distance between the projector and the scrim are linked questions. If you answer one, you answer both.

When setting up a rear projection keep in mind that the hot-spot of the projector is unpleasant to look at. So you will want to angle the projector so that the audience is not staring into a powerful bulb. Sometimes people shield the bulb and tilt the projector to project over the edge of the shield.


Most projection is a projection of light not shadow. In the case of shadow projection you project light and block a portion of the light producing either a shadow or silhouette. For the purposes of this discussion I�ll refer to a silhouette screen and a shadow screen with one small distinction between the two: a silhouette is a shadow that is true in size and not distorted in shape. So the silhouette of a 6 foot tall man is also 6 foot tall, whereas the shadow of a 6 foot man could be 2 foot or 20 feet tall. Most people want a silhouette effect.

When most people try to create a silhouette they take a strong light source place it behind the actor who is in turn behind the scrim. When they turn the light on, they blind their audience. To correct this, they now tilt the light source upward. When the light source is tilted a distorted and larger shadow is cast. For our purposes this is a shadow screen. If you want the distortion this approach is good.

If you want a true silhouette, it�s easiest to turn the light source toward a light colored back wall. Once the wall is lit strongly the actor steps between it and the scrim and a perfect silhouette results. No distortion or double shadows should occur if the lighting is even. Note that the wall can be lit to any color. So Dr. Jeckyl could be shown in silhouette against a blue wall and Mr. Hyde could be silhouetted against a red wall. For this article, this is a silhouette screen.

A third distinct effect is similar to the silhouette. A strong light source is tilted up as such an angle that it lights the edge of the actor�s hair and shoulders (a hamburger light effect), but at such a steep angle that the cast shadow misses the scrim. The actor appears outlined in a line of light. The actor�s image will not be distorted.

Should a character need to shrink and grow (Alice in Wonderland, the mice in Cinderella) or distort (Jeckyl into Hyde or the Cyclops in The Odyssey).


Can I project on a printed scrim or a painted scrim?


Yes, you can project on a printed scrim or painted scrim, but the effect could be a hybrid of both images (the one projected and that on the scrim). Imagine a large mirror frame printed as a border on a section of scrim which is a solid light grey in the center. Live action can be projected onto the mirror (grey center).

If a scrim were painted or printed to be the bedroom of Scrooge, then Marley's ghost could be projected onto the wall (painted scrim). Similar effects can be used to produce the cemetery/dream sequence in Fiddler on the Roof.

Shadows can be projected on a printed or painted scrim, however be aware that the printed/painted image will fade. A shadow or silhouette of the tornado in Wizard of OZ is a good example of a shadow use on a printed scrim.

Need to talk about projection?

to speak to someone